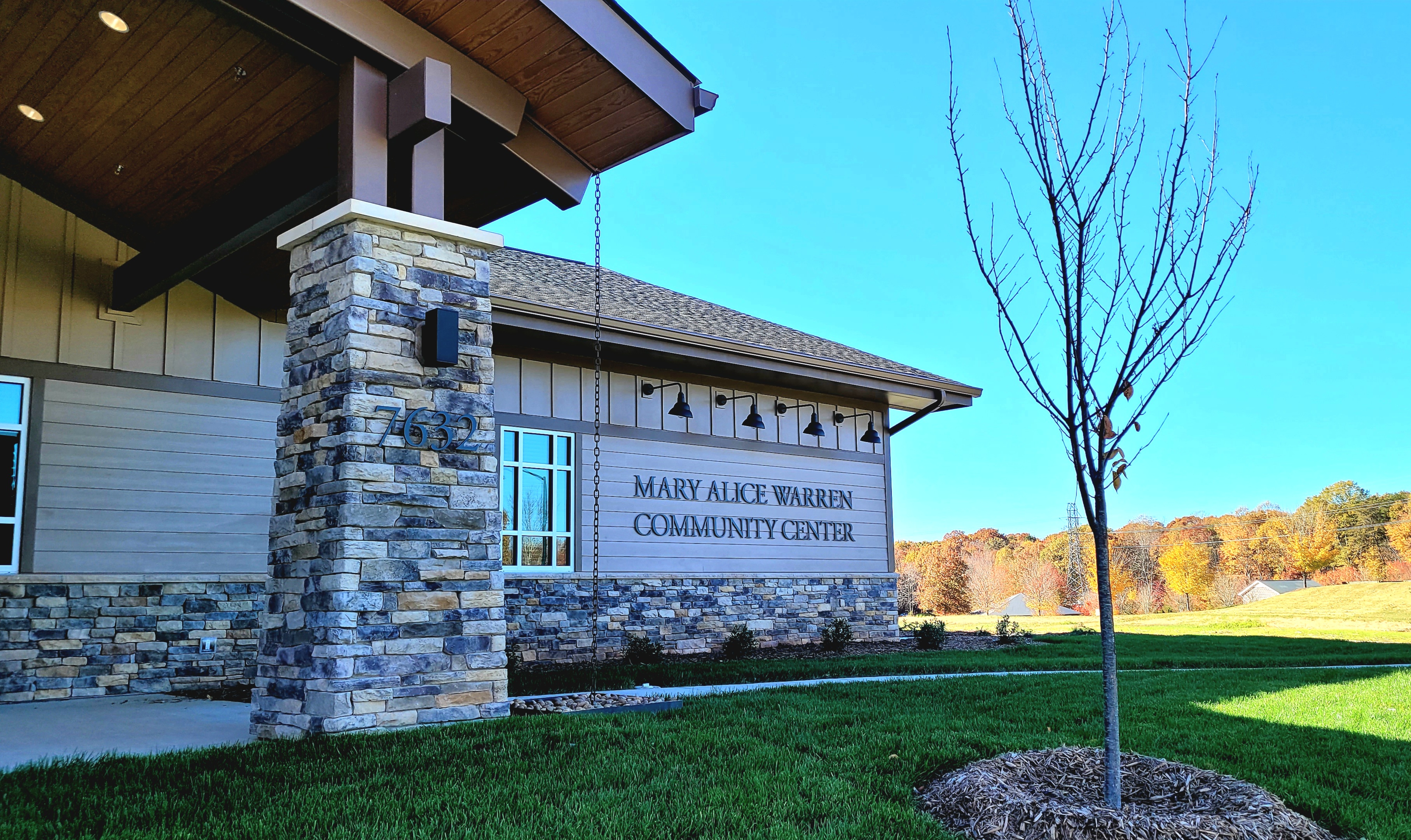 Lewisville community center celebrates official opening. Facility named after Mary Alice Warren, who grew up on the property and recently celebrating her 100th birthday. The center, which features meeting, conference and activity rooms along with a full catering kitchen and large covered outdoor patio, will fill the needs of many of the town’s nonprofit organizations and be available for general rental beginning in December. Programs, classes and other activities for the public are scheduled to begin in January.

Since being incorporated in 1991, the Town of Lewisville has celebrated a number of milestone events that have “helped shape a community and also create community.”

Those words spoken by Mayor Mike Horn certainly rang true when Lewisville commemorated the opening of the Mary Alice Warren Community Center with a ribbon-cutting on a sun-splashed but brisk Sunday afternoon.

“Today we add one more to the list as we officially open the Mary Alice Warren Community Center that’s going to be such a blessing to our residents today and many, many years in the future,” Horn said. “It’s such a special day.”

Although the ribbon-cutting for the 12,000-square-foot center was held primarily for Lewisville’s boards, committees and individuals who have been involved in the construction and history of the center, a public drop-in/open house has followed daily this week — starting Tuesday, Nov. 16, and continuing each day through Friday from 4 p.m. to 7 p.m., and also Saturday morning from 9 a.m. to noon.

The center is named after Lewisville resident Mary Alice Warren, who grew up on the property and donated the 15-acre site for the facility, which is located off of Lewisville-Clemmons Road next to Jack Warren Park. She also donated the adjoining land for the 15-acre multi-use park.

Appropriately, Warren, who celebrated her 100th birthday in March, was on hand to cut the ribbon with assistance from Horn and members of the town council — who were also on the covered entrance to the facility.

As the master of ceremonies, Horn told the gathering that over the years that he has gotten to know Warren that she has shared many stories of her treasured days of growing up in Lewisville.

“There’s one in particular that’s most appropriate for this day,” he said. “It was another day, nearly 75 years ago, toward the end of World War II. Mary Alice’s father had just passed, her brother was fighting in North Africa, and she and her mother had a decision to make — a decision about what to do with the family farm, this place where we sit today. They walked from their home and sat down under a big oak tree, the one that’s right behind you.

“They talked about whether to sell the farm or keep it. There were lots of anxious buyers waiting to get their hands on the beautiful place. However, Mary Alice says the decision was an easy one, because, back then, people held on to their land, particular her mother. It was part of her heritage and the vestige of their family. In that one moment, they could not have guessed the future impact of that decision or even imagine what the family farm would become.

“Today, because of what she and her mother decided, we celebrate Jack Warren Park and the Mary Alice Warren Community Center — a total of 30 acres in the heart of Lewisville enriching the lives of so many and setting an example of generosity for others.”

The center, which features meeting, conference and activity rooms along with a full catering kitchen and large covered outdoor patio, will fill the needs of many of the town’s nonprofit organizations and be available for general rental beginning in December. Programs, classes and other activities for the public are scheduled to begin in January.

A long list of dignitaries, including elected officials — past and present — from the town, county and state were in attendance along with staff and others who have played different roles along the way, and family members and special guests of Warren.