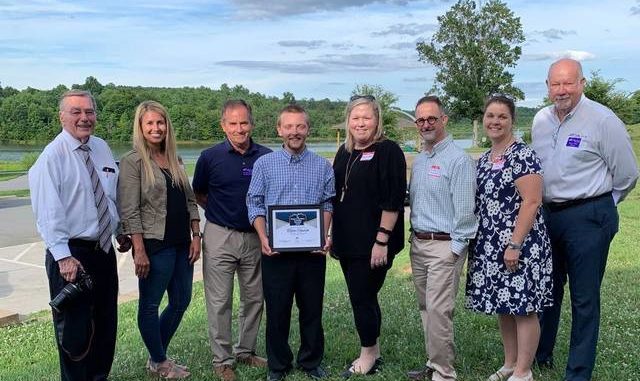 The Shallow Ford Foundation (formerly The Clemmons Community Foundation) has awarded the first Wayne C. Matthews Continuing Education Award to Tyler Church of Jonesville. The scholarship was created by the Shallow Ford Foundation’s board of directors to honor the far-reaching impact and influence of Dr. Matthews, who passed away on June 23, 2020. Dr. Matthews served as Director of the Yadkin Center at Surry Community College.

Loretta Matthews, Wayne’s wife, shared, “My family and I are honored to know that Wayne’s legacy of ensuring Yadkin County’s citizens can obtain a college degree while remaining close to home. Wayne’s unrelenting passion to pursue educational opportunities for Yadkin County is evident in his dedication to Surry Community College’s Yadkin Campus,”.

The recipient of this $2,500 scholarship, Tyler Church, was screened and interviewed by a committee of individuals who were close to Matthews. The members were Bobby Todd, Emmy Matthews Corn, Jill Harding, Jeff Hinshaw, Gary York and Shallow Ford Foundation Board Chair, Maria Poindexter Vernon.

Committee member Bobby Todd, President of the Yadkin County Chamber of Commerce said, “What a great way to honor my friend! Wayne always placed a high emphasis on education, and this scholarship will provide the education and skills, learned at the Yadkin Campus, for a long-lasting career. Wayne was the face of the Yadkin Center since it was just an idea in the 90’s, to the opening of the first building in 2003, and now reaching designation of a campus. This scholarship is a reminder of the impact on education and the greater community by Dr. Wayne C. Matthews.”

Church graduated from the Yadkin Early College High School last year. In his scholarship application, he listed this as the accomplishment of which he is most proud. Tyler offered the following when notified of his award, “This scholarship is not only going towards my education but it is going towards my future goals. The scholarship is also a blessing,”. He credits his family for his accomplishments — instilling the values of hard work, perseverance, and giving him confidence to pursue a successful future.

The path he started at the Early College now leads him to completing a degree in Electrical Systems Technology from Surry Community College-Yadkin Campus, with scholarship in hand.

Jill Harding, Director of The Pilot Center at Surry Community College also served on the selection committee. She added, “Dr. Matthews fully embraced any opportunity to help a student, particularly those in his community. In my short time at the Yadkin Center, I observed so many conversations with Tyler that reflected his love of life and determination to succeed. I think Wayne would be truly happy that we chose Tyler, a friendly face around campus during his time at Yadkin Early College High School, and now a Surry Community College student determined to make his own way.”

Church has long had an interest in technology and electronics specifically. His goal has always been to work with his hands, and he found the electronics program at the Yadkin Campus offering him the perfect combination suited to his dreams and interests, opening the door to a rewarding and fruitful career. He currently works for Lowes Home Improvement while he is working towards his degree, utilizing some of the credits already received at the Early College. Over the years he has also served the community through Rotary Interact Club activities and his church.

In his interview, Church recalled the encouragement he received not only from his family but the teachers at the Early College as well. He also shared one other source of support and motivation. Like so many others, Church personally felt the impact of Dr. Matthews. He clearly remembered a presentation Dr. Matthews gave to his class, where he encouraged them to work hard and also shared his belief that if they did work hard, they would all succeed. More personally, Church looked back on several one-on-one hallway conversations between classes with Dr. Matthews, talking about everything from cars to school to life in general.

Church reflected in his scholarship interview, “He was a good man; he helped me to push harder towards my goals.”