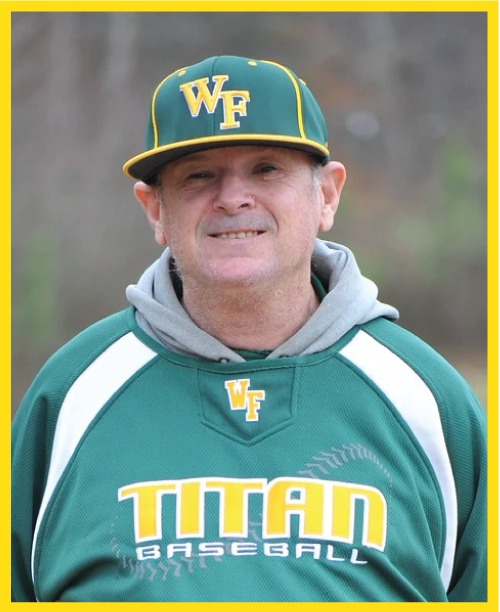 He’s described as the No. 1 Titan — West Forsyth High School’s biggest fan and supporter. He “bleeds green” and those associated with WFHS football and baseball know him as Coach Murph.

He’s described as the No. 1 Titan — West Forsyth High School’s biggest fan and supporter. He “bleeds green” and those associated with WFHS football and baseball know him as Coach Murph.

Pat Murphy, Coach Murph, has always given everything he has to the Titans. He has spent nearly three decades supporting the coaching staff and students at West Forsyth.  He attends every practice and game, helps in between as he can, and is known to truly brighten the lives of those who have the privilege of interacting with him. Coach Murph has faced the greatest of challenges and yet, his outlook on life is nothing short of inspirational and good natured.

Good natured, but also willing to “fire” anyone he thinks deserves it.

According to head varsity baseball coach Brad Bullard, “Any time we win in football or baseball then of course he coached that game. But if we lose, then he is very quick to fire myself or Coach Snow and throw us under the bus. I am pretty sure Coach Murph is undefeated as a coach in 25-plus years of coaching at West Forsyth and myself and Coach Snow are defeated.”

But the good natured taunts go the other way as well.

Bullard adds, “Any time a coach wants to get Murph flustered and going we tell him we’re going to send him to Reagan to coach football with Josh McGee (former West graduate and offensive coordinator) or sending him to Mount Tabor to coach baseball with Kevin McIntosh (former West graduate and assistant baseball coach here). We always tell him we are going to trade him for a flat football or for some used baseballs.”

In all seriousness, Coach Murph won’t be going anywhere else anytime soon and it is clear that is the way the Titans want it.

A new scholarship in honor of Pat Murphy’s joy-filled spirit and his unwavering commitment to West Forsyth through its athletics will be awarded for the first time in 2022. This comes at the request of a West Forsyth graduating senior who desired to recognize Coach Murph and leave a legacy of serving others. The W.F. Fund, in partnership with the Shallow Ford Foundation, will officially announce the Coach Murph Scholarship on Friday at West Forsyth’s final home football game of the season.

The $16,000 scholarship, given in $4,000 increments over a 4-year period, will be awarded to a graduating senior from West Forsyth High School who is of good character, has overcome challenges through dedication and hard work, has excelled, and served as a true servant leader on the field of play, in the classroom and in the community. The scholarship was established by W. F. Fund with an initial donation by an anonymous Titan family.

Students can apply for the scholarship beginning in early 2022. The Shallow Ford Foundation will administer the application, selection and award of the scholarship with involvement of members of the community and the W.F. Fund. The foundation was established in 2004 by the Clemmons Rotary Club as the Clemmons Rotary Foundation and converted in 2012 to the Clemmons Community Foundation. In July of 2021, it became the Shallow Ford Foundation — a name reflecting the broader geographic region served. The foundation also administers several other scholarships offered at West Forsyth High School, as well as other schools in our area, annually.

While this new scholarship will formally honor Coach Murph, his impact on West Forsyth is already strong and those who knew him at West Forsyth still remember him. Lyle Pfingst a senior at Catawba College, who is going to Wake Forest University for graduate school next year, recalls, “I still think about Murph here at Catawba, I wonder ‘How’s Murph doing? I wonder if he is still giving signs at baseball games. ‘,”

Pfingst played for the West Forsyth baseball team from 2015-2018 and remembers the role Coach Murph played. “He brought the morale up all the time, he never had anything negative to say. He was always around; without him it would not be West Forsyth baseball or football. Whenever I would ask him what the score would be, he’d say ‘80 to nothing’, which is kind of hard to do in a baseball game.”

A plaque will be presented to Coach Murph at halftime during Friday’s home football game against East Forsyth High School. In addition, a plaque will be unveiled and given to the school for each scholarship recipient’s name to be added annually. The game begins at 7 p.m.

Learn more about the scholarship at coachmurph.org.

Greg Keener is program officer at the Shallow Ford Foundation.